Highlights from the #DigitalHive Summit 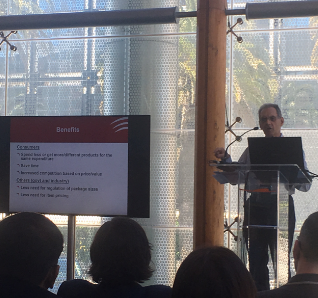 Day one in sunny Portugal’s Consumers International Digital Hive was a stellar line up of side events, bringing together consumer groups from around the globe to discuss the importance of consumer standards in driving change.

Standards have played a key role in improving protections across a range of markets including food fraud, car emissions and white goods safety, but they’re also playing an increasingly role in the digital world too. Standards can be important as they often provide the detail absent in principles-based policy and legislation.

Consumers International plays a key role in fostering and encouraging local standards bodies to liaise closely with consumer organisations. Examples of some of the key things that consumers commonly need from standards can be found below.

Consumer protection: privacy by design for consumer goods and services (in development) – ISO31700

A key standard currently under development with input from Consumers International is theConsumer protection: privacy by design for consumer goods and services standard. Antonino Serra Cambaceres from Consumers International highlighted that a key focus for CI is building trust in a digital world and one central way to establish this is through the development of standards. Secondly, CI is also focussed on privacy and how this is increasingly being eroded for consumers and this is another issue where this standard will aim to improve protections.

Ceri Stanaway from BSI discussed the key issues currently being worked through on this standard include:Ensuring that real (not only intended) consumer use of the product is built into design, covering unintended uses;Ensuring that protections adequately address the fact that the product that you buy may not be the product that you use after software updates. Security and trust are key.Guideline for inclusive service: identifying and responding to consumers in vulnerable situations (in development) – ISO/NP22458

Next up, Sadie Homer from BSI talked about why vulnerability is such a priority for their work – because the topic impacts such a large number of consumers at the one time.

As is increasingly being recognised in the policy and business community, everyone can be vulnerable at different points in their life. The group working on this standard outlined their working definition of some of the key risk factors for vulnerability below.

Key things that this group is now working on as part of this standard include:Privacy-by-designInclusivity and accessibility at the design phaseEarly identification of needs – staff training and asking the right questions, open dialogue with consumersPractical advice for businesses and how they can respond to vulnerability.

Online Consumer Reviews – Principles and requirements for their collection, moderation and publication – (in effect) BS ISO 20488:2018

Lastly, Ceri from BSI talked us through a new standard developed aimed at making consumer reviews more trustworthy. The reason this has been a key project for BSI is due to the proliferation of platforms with consumer reviews increasingly influencing consumer behaviour.

A range of problems have been uncovered by consumer organisations with online reviews including fraudulent reviews not only misleading consumers but damaging businesses’ reputation and sales.

A recently released Which? report highlighted some of the problems with manipulated online ratings, including the citing of an unknown headphone brand which on Amazon’s platform garnered 400 5 star reviews in a single day.

Standards can play a key role in ensuring that online reviews are fair, accurate and trustworthy. Some of the key elements in the new standard include:Moderation is required by sitesOnly the author can edit the review and it should be markedT&C’s should be developed for both users and suppliers that are clear accessible and accepted by anyone submitting a reviewSites must remove fake and fraudulent reviews.

Ian Jarratt from Consumers Federation of Australia kicked this session off highlighting how clear, transparent representation of unit pricing is key across many markets to ensure that consumers can make informed choices.

Starting as a voluntary system in the US due to the shift from loose products to packaged products, this moved to mandatory in the 1970’s in the US, followed by Japan in ’74, EU in ’98, Canada in ’01 and Australia in ’09. The key reasons for this shift to mandatory requirements were: increasing package diversity, cost of living pressures and to promote competition.

The main issues where jurisdictions have implemented unit pricing include:Unit pricing not being prominent and legibleInadequate placement is actually discriminatoryInconsistent provisionInconsistent units of measuresLack of enforcement, education, research and review of effectiveness.

ISO 21041:2018 standard was completed in Dec 2018 involving many consumer organisations globally including Australia.  Sadie from Consumers International highlighted this as a great example of such a strong mix of representation from across various consumer organisations around the world in developing the standard.

Case study examples were also explored, with Ken Tsuruta, Japan Consumers Cooperative Union highlighting shrinkflation as a major problem. A recent survey from 2018 in Japan found that only 34% of consumers were aware of unit pricing. 59% would look at the unit price if it was available and 81% would like to use it if the system was more effective and supportive.

In Australia a review of unit pricing is currently underway. An assessment of the Australian system is that it is working – a recent CHOICE survey found 80% of consumers use unit prices, however 64% reported problems with system (incorrect measures). Next steps now for Australia are to focus on improving how the system Is being implemented by industry, but also to expand reach to other sectors and stores such as hardwares and pharmacies, as is the case in the EU.

We’re really looking forward to Day 1 of the Summit kicking off with a jam-packed day of speakers from around the world talking everything from AI accessibility, fairness, choice disruption to coming of age in the digital playground.